Experience Africa with me
by Michelle Stark, Founder Matanya’s Hope 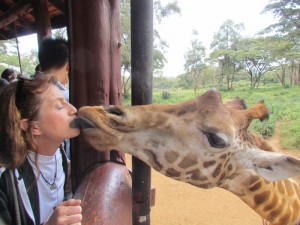 My name is Michelle Stark. When I went to Kenya for the first time in 2005, I worked 3
jobs, 7 days a week to make ends meet for myself and my 18 year old son. When my
parents approached me 2 years before that to take my son and me with them on a trip to
Africa, my heart was filled with the kind of joy I hadn’t known for quite some time. My
father wanted his family to be there together with him, to help celebrate his 70th
birthday. Africa had been their destination of choice for years and still is. They go often.
I heard stories from their friends who’d gone with them and seen their photographs
which filled my eyes with wonder! Now, unbelievably, I would finally experience this first
hand!

…our plane approached the runway – a long pathway of worn earthen trail amidst a field
of frolicking wildebeests. The way they ran around was almost rehearsed – as if they
were laughing at us – playing their game; I felt like I was landing in the middle of a movie
set but it was so real I had to pinch myself! My eyes brimmed with such happy tears I
actually hid my face – this was so private – I didn’t want to explain – not to anyone. I was
here with my family – my father’s dream became a part of my personal reality – and I just knew
that this was going to be the kind of experience that one doesn’t forget.

We awoke early every day for game drives on which we encountered lions, cheetahs, monkeys,
giraffe, elephants, zebras, wildebeests, wart hogs, cape buffalo, hyenas,
vultures, crocodiles, hippos and much more! The sights were not to be believed! – The air
was delightfully fresh and clean! The sky seemed to span forever! We saw women hard at
work, primitively spinning lambs wool and weaving it into magnificent garments. The vivid
colors of their textiles came from their own unique use of flowers, leaves and
speckled beetles (yes bugs!). Often, the workers’ feet were bare – their pockets empty, but
their hearts were full of a kind of joy that made me happy to be near them. They exuded an
intangible richness which I later learned was born from a quality of life that seems to have disappeared from most of our world.

One day, we went to visit a school near the Sweetwater’s Game Reserve. The children
were clothed in tattered uniforms. Their gray cardigans were often pilled and marked
with tears and runs. The girls wore light gray cotton skirts that came well below their
knees and the boys wore darker shorts or pants. The clothing bore all of the signs of
being handed down from student to student over the years. It was marked by signs of
Africa ‘s earthen floor being woven into the very fabric. As the children sat on the ground of
the great outdoors (their auditorium) at attention, with their hands in the air (showing
their readiness to meet us), I could count the lucky few who owned a pair of shoes.
Money surely lacked here, but even at this sight, I was not capable of understanding the
horrific depth of poverty these children faced every day.

Our group of approximately 25 American tourists split up into smaller units and we were
lead by the children and their teachers to different classrooms. Fragmented boards
were nailed together over a frame of sorts and combined with cinder blocks to create a
room for shelter. Pieces of corrugated tin stretched over the long building providing a
make shift roof. There was no running water. There was no electricity. Each
classroom had a few windows – and the spaces between the boards where the sun was
beckoned in provided light for their studies. The desks were made up of hand cut 2 X 4’s
with a writing surface the width of one board, barely enough to support a book. The benches,
picnic table style, were nailed to the desk; each supported three students who had to
squeeze in, in order to sit down. Although standing to answer a question was required of
any student, the older children were unable to straighten their legs in the tight space
between bench and desk.

It was here that my world was about to change. The teacher from “our classroom”
approached me with Mercy Nyawira Chege’s composition book, a student from that
class. The writings she showed me were impeccable. The teacher explained that Mercy
was one of the best students in the school. It was clear to me that the child could write.
Then, she sadly shared that this child would not get to go on passed the 5th grade as
her parents could not afford $10 for her required uniform that coming year. My heart
sank. $10? No school? I wouldn’t accept this scenario for such a bright girl; all I could think
was: SHE WANTS to LEARN!